The Quarry draws easy comparisons to The Cabin in the Woods, director Drew Goddard’s playfully meta horror flick from 2012.

Mashable’s own Jess Joho drew the comparison herself in our review, noting that the game features “only slightly fewer meta layers than [the movie’s] winkingly self-aware smorgasbord of teen horror movie tropes.” It’s a sharp observation given the various ways The Quarry speaks in the language of horror films. But Cabin wouldn’t be the first point of comparison for Will Byles, who directed the new Supermassive Games release.

I spoke to Byles about The Quarry shortly before its June 10 launch on PC, PlayStation, and Xbox hardware. We spent a lot of time talking about how the new game and its predecessors — Supermassive has a signature knack for building, effectively, playable horror movies — engage with and enhance the language of film.

In the midst of all that, I asked Byles to draw on his intimate familiarity with the genre and play a little game. How would he program a hypothetical film festival tied to The Quarry? Which movies would he pick and why?

Most of these people are doomed; them’s the rules.
Credit: Paramount / Kobal / Shutterstock

“Definitely Friday the 13th,” he said, almost immediately after I got the question out. Which makes sense.

For anything else The Quarry does, it builds its story around a group of camp counselors who are trying to survive their last night in the woods. That directly nods to Jason’s inaugural slaughterfest from 1980, when the hockey mask-wearing monster terrorized Camp Crystal Lake.

Byles also used this example to tie both the movie and the new game to Until Dawn, the excellent 2015 horror adventure from Supermassive which he also directed. Both games play with the kinds of teenage archetypes and clichés that Friday the 13th keyed into directly.

“Obviously [with] The Quarry, we took things from the ‘cliché teens’ [from] Until Dawn and went a bit further. So we went straight to summer camp.”

How to watch: Friday the 13th is now streaming on Paramount+.

An American Werewolf in London 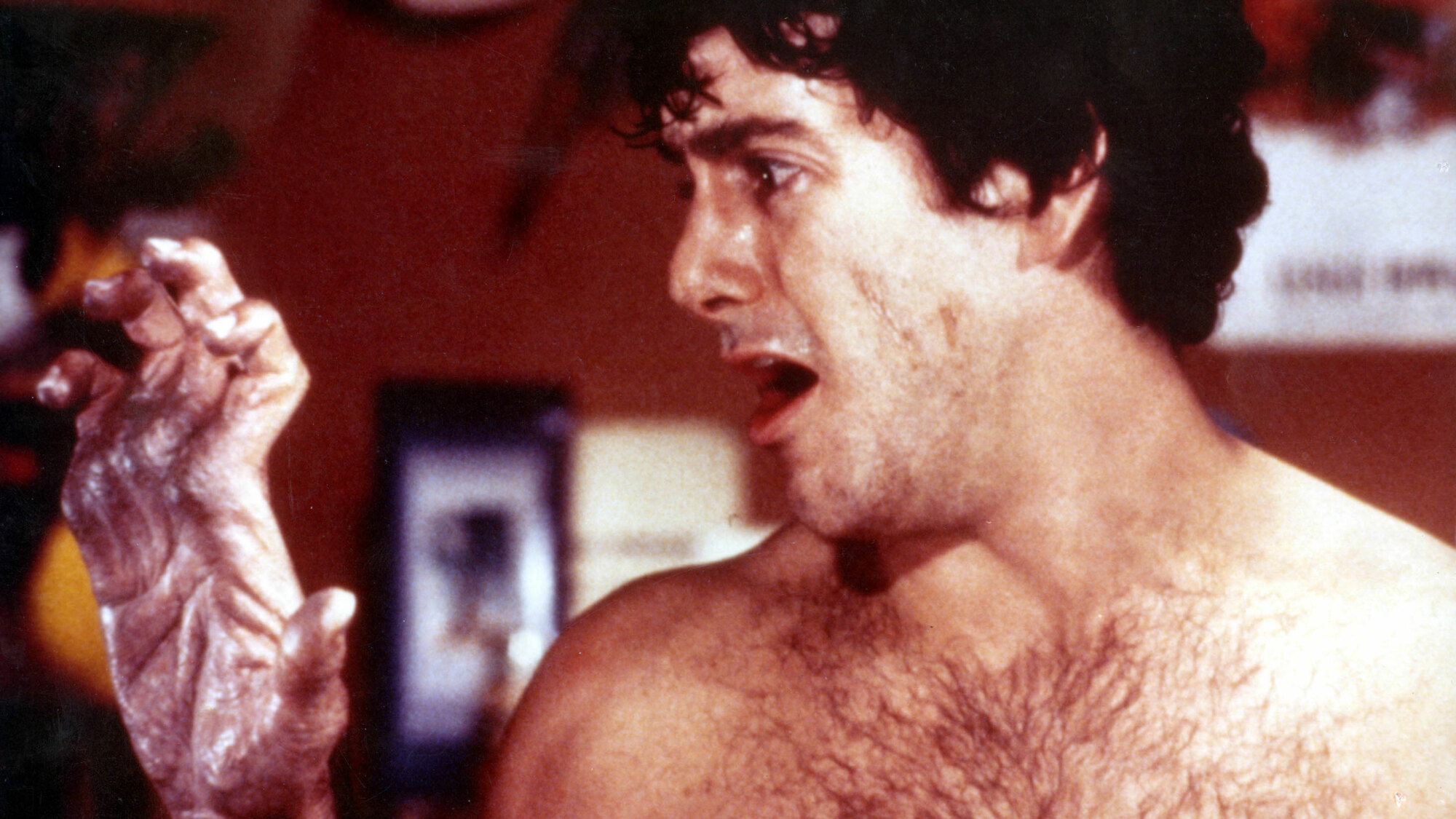 One of the more legendary werewolf transformations in Hollywood history.
Credit: Moviestore / Shutterstock

This 1981 horror-comedy written and directed by John Landis follows a pair of backpackers (David Naughton and Griffin Dunne) after their fateful run-in with the classic movie monster during a trip across England. It’s funny and scary in equal measures, and the whole thing is further enhanced by superlative work from the legendary effects and makeup wizard, Rick Baker.

“A little bit of a spoiler [in that pick], but I think that was one of Landis’s best movies ever. It was the first movie I ever saw that was genuinely shocking and scary [and it] has the best werewolf transformation scene,” Byles said.

“Werewolves are difficult animals to muck about with because you go from dog to wolfman and there’s a whole range [of visuals] in between. Also, the music was fantastic. The juxtaposition of ’50s and ’60s rock with…an early ’80s mentality. The humor. The zombie friend coming back worse and worse and worse. That would definitely be in there.”

How to watch: An American Werewolf in London is now streaming on Peacock. 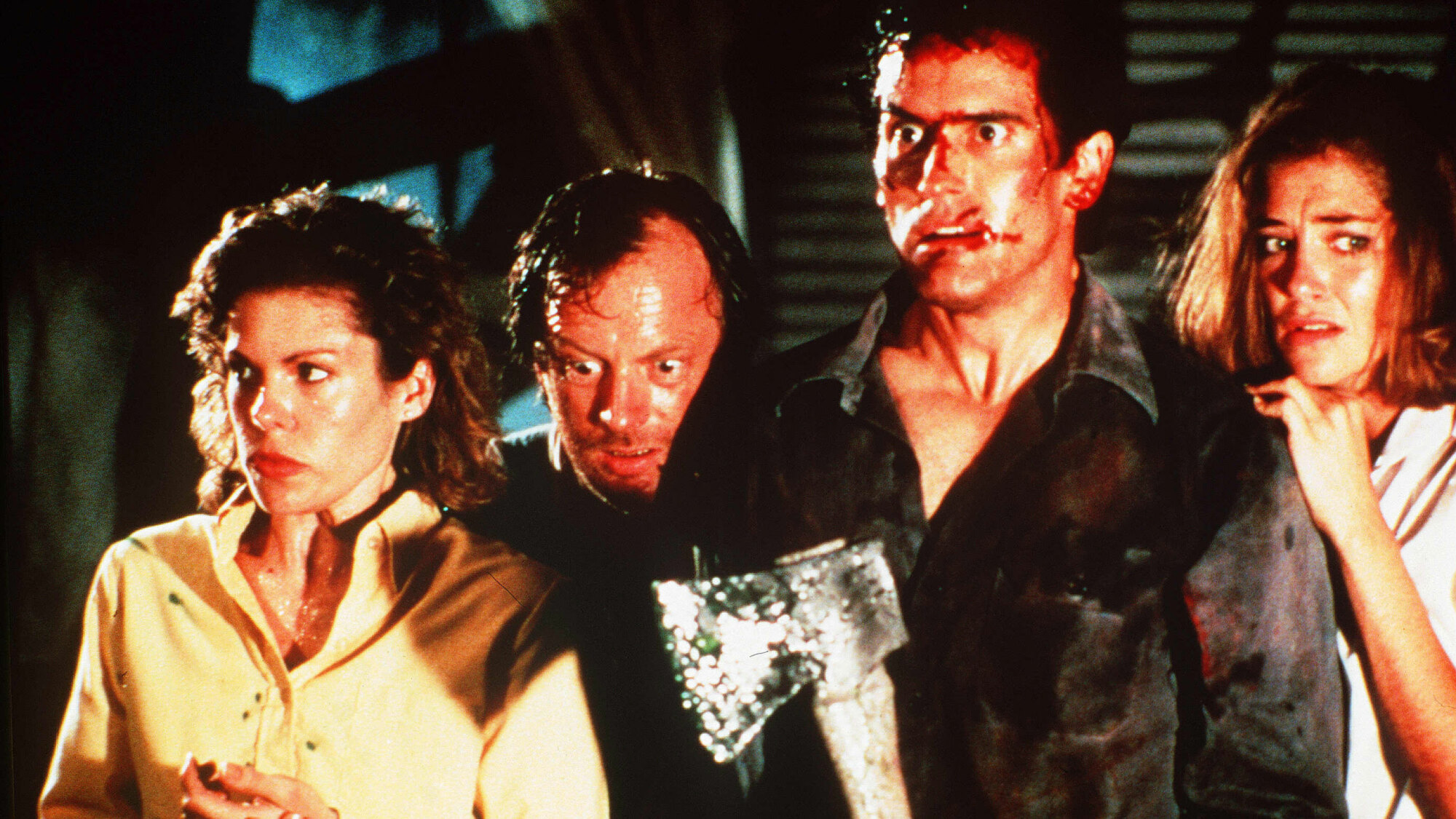 Filmmaker Sam Raimi is getting a lot of attention lately for taking Marvel stories in a different direction with his work on Doctor Strange in the Multiverse of Madness. The horror sensibilities he brought to the MCU were sharpened by decades of experience, and if there’s any blueprint for his particular marriage of horror and comedy, 1987’s Evil Dead II is where you’ll find it.

Byles sees Raimi’s story of Ash Williams (Bruce Campbell) fending off demon attacks from a cabin in the woods as a sort of companion piece to the American Werewolf pick. It’s also a horror-comedy, and the balance it finds between gross-out frights and belly-shaking laughs is damn near perfect.

“It’s super frightening but…it had enough humor to offset that,” Byles said, specifically hailing Raimi’s use of “cartoon violence” as one of the keys to striking a balance. “It is really violent, but… you know, [Ash] cuts his hand off with a chainsaw. That’s ridiculous, but it’s brilliant.”

How to watch: Evil Dead II isn’t part of a subscription, but it’s available to rent or buy digitally from Prime Video, YouTube, Apple TV, Google Play, and Vudu. 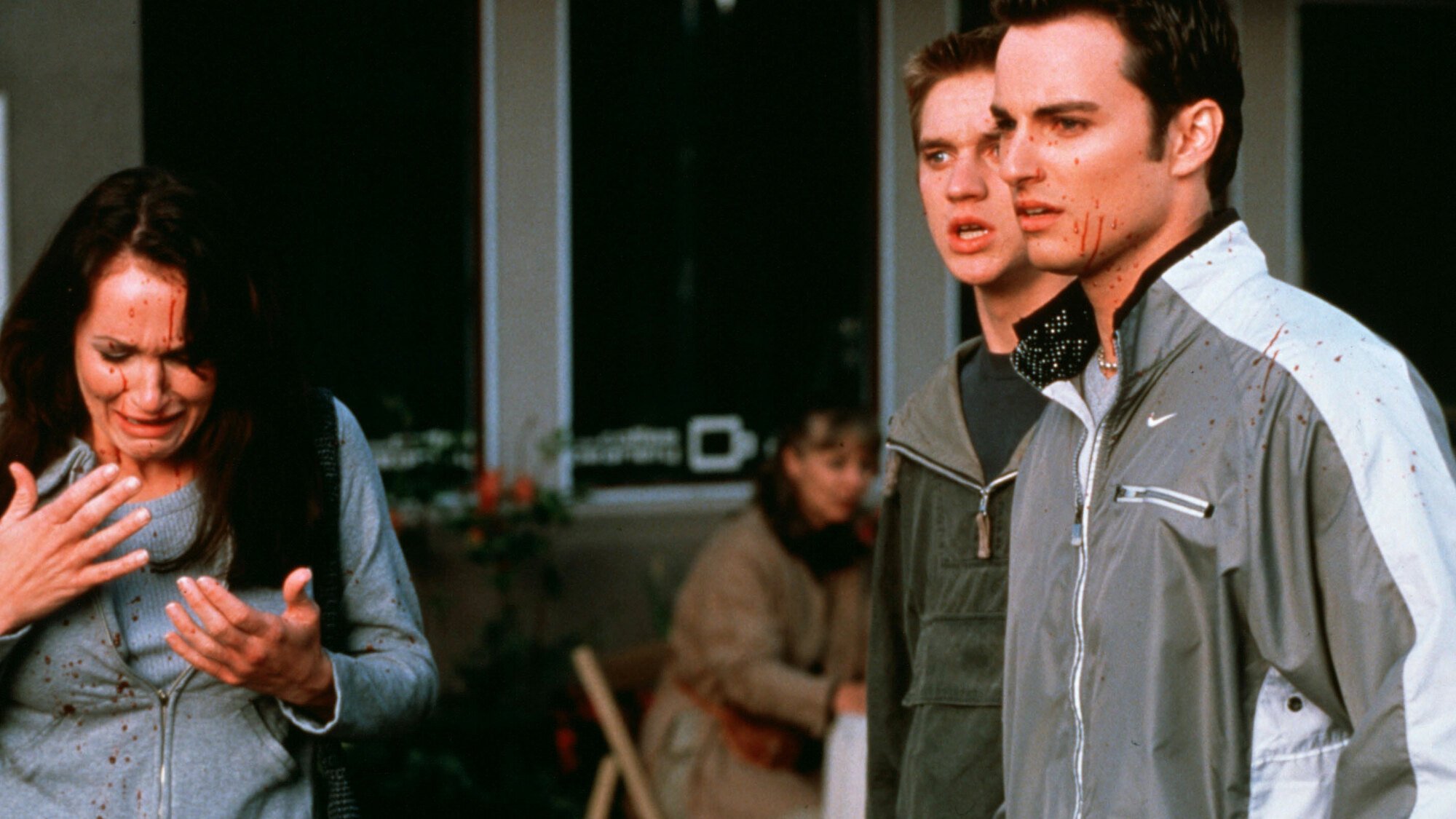 You definitely don’t want to know where that blood came from. (Yes you do, it’s the whole shtick of these movies.)
Credit: New Line / Kobal / Shutterstock

If you’ve never heard of Final Destination, it’s worth making time for, whether or not you plan to play The Quarry. The first film in the series (and really every one that follows) makes the most of a simple concept: When a group of people escapes certain death after Alex (Devon Sawa) has a premonition, it turns out to be a mere stay of execution as a grisly fate comes for them all, one at a time.

“If you look at [Final Destination] versus something like Hostel, they’ve probably got the same level of violence,” he continued. “Hostel is horrible. But in Final Destination, when something bad happens… the cinema will laugh. And that’s the right [response]. It’s like, ‘Oh my god, that’s so gross that it’s ridiculous.”

How to watch: Final Destination is now streaming on HBO Max. 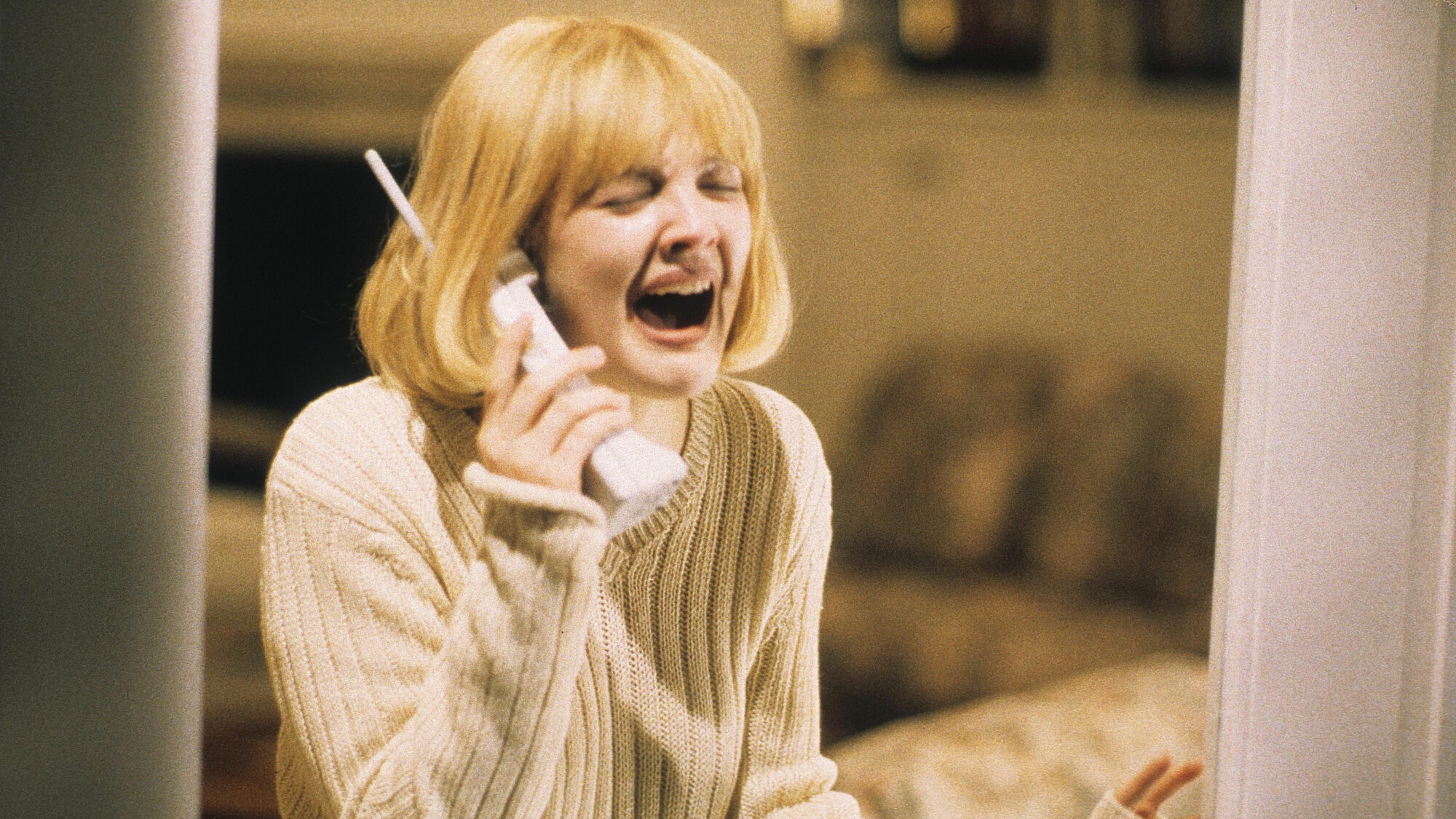 One of the greatest horror movie intro sequences of all time
Credit: Miramax / Kobal / Shutterstock

“I think it would have to be Scream,” Byles said as he pondered his final pick. The 1996 meta-horror from Wes Craven is fundamentally a slasher movie, but its active acknowledgment of genre tropes at the time marked the beginning of what The Quarry director described as “postmodern self-referential horror.”

He especially keyed into the subversion of expectations at play in the movie’s intro, which sees a character played by top-billed star Drew Barrymore killed off almost immediately. It’s a trick that Alfred Hitchcock famously played in Psycho with the early death of Janet Leigh’s character, but not one that Byles recalls seeing much of since.

“It was so shocking at the time,” he said of the Hitchcock classic. “And Scream did the same thing.” The jarring permanence of a movie’s apparent protagonist being suddenly killed off early on had a direct impact not just on The Quarry, but on Until Dawn as well, in the way that both games’ branching storylines leave all potential character deaths on the table.

“That was a super important thing,” he explained. “You’ve got all these characters here [and] you should be able to keep them alive. But actually, when they die, they’re dead and you can’t go back and get them better again. The story has to change.”

How to watch: Scream isn’t part of a subscription, but it’s available to rent or buy digitally from YouTube, Google Play, and Vudu.

How the CHIPS Act could help the auto industry