Sure, making a product smart appears to increase the value, but often it’s just that: an appearance. At best, smart product apps take up storage on your iPhone; at worst, their connectivity makes you vulnerable to hackers. And if the tech breaks, you’re out of luck getting something done that you might not have needed tech for in the first place.

Automatic feeders for pets are far from immune to this phenomenon. That’s why WOpet’s low-tech version is kind of a breath of fresh air. Automatic feeders range from $50 to $250. The Sprite is on the slightly more budget-friendly end of the spectrum at $75, and it has the bare-bones features to match: No WiFi or camera or even an app. What is does have is an average rating of 4.6 out 5 from over 5,000 reviews on Amazon.

I used the WOpet Sprite automatic feeder for two weeks with my dog, Lola. My take? It’s far from perfect, but it fits the criteria for what I think makes a good tech gadget: It works reliably, solves a problem, and is (mostly) hassle-free.

The feeder arrived mostly assembled. All I had to do was attach the feeding tray and plug in the power cord. It also came with an alternate food dispenser for dispensing even smaller portions (more on that later). This is apparently so you can customize the portions based on the size of your dog. The feeder can also convert to battery power if your electricity cuts out, which gives you peace of mind if you’re going to be away from home for a little while. It takes three D batteries, but they’re not included.

Lola is clearly being bribed with a treat for this photo.
Credit: Mashable

The design is minimalist and unobtrusive. The feeder is about 10 inches tall, made of sturdy plastic with a white cylindrical body and a transparent lid. It weighs about six pounds without food, which gives it a sturdiness that would seem to withstand even the most enthusiastic puppy. It’s taller and slimmer than other feeders out there, so it doesn’t have a big footprint — convenient because it’s meant to sit on the floor, or at reachable level for your dog. Despite the sleek design, it holds seven pounds of food, which is more than similar feeders on the market.

Programming meals shouldn’t be this hard

With the feeder plugged in, it was time to program the meals. Here’s where I ran into a few issues. The instruction manual was confusing to read, with odd phrasing and syntax. Despite that, the instructions were detailed enough and had lots of diagrams, so it wasn’t a huge obstacle.

The issue came with programming the meals. The panel itself seemed pretty dated and was described by one Amazon reviewer as “a Texas Instrument calculator from the early ’90s.” The buttons were small and required some effort to push down — an irksome feeling for my fingerpads, so used to the pleasing tactility of a good keyboard.

Speaking of tactility, to program anything (time, meals, portions, etc.) you must hold down the corresponding button as you set it — i.e., to set the clock, hold down “Time” and keep pressing “Hour”/”Minute” until you get to the correct time. To set a time for a meal, hold down the corresponding meal button and do the same. This may not seem like a big deal, but needing to use two hands to set a very little thing gets annoying. This is especially true because the clock is in military time, so you have to press the button many times to cycle through to your desired setting. It might also be difficult for someone who has arthritis or a hand disability. 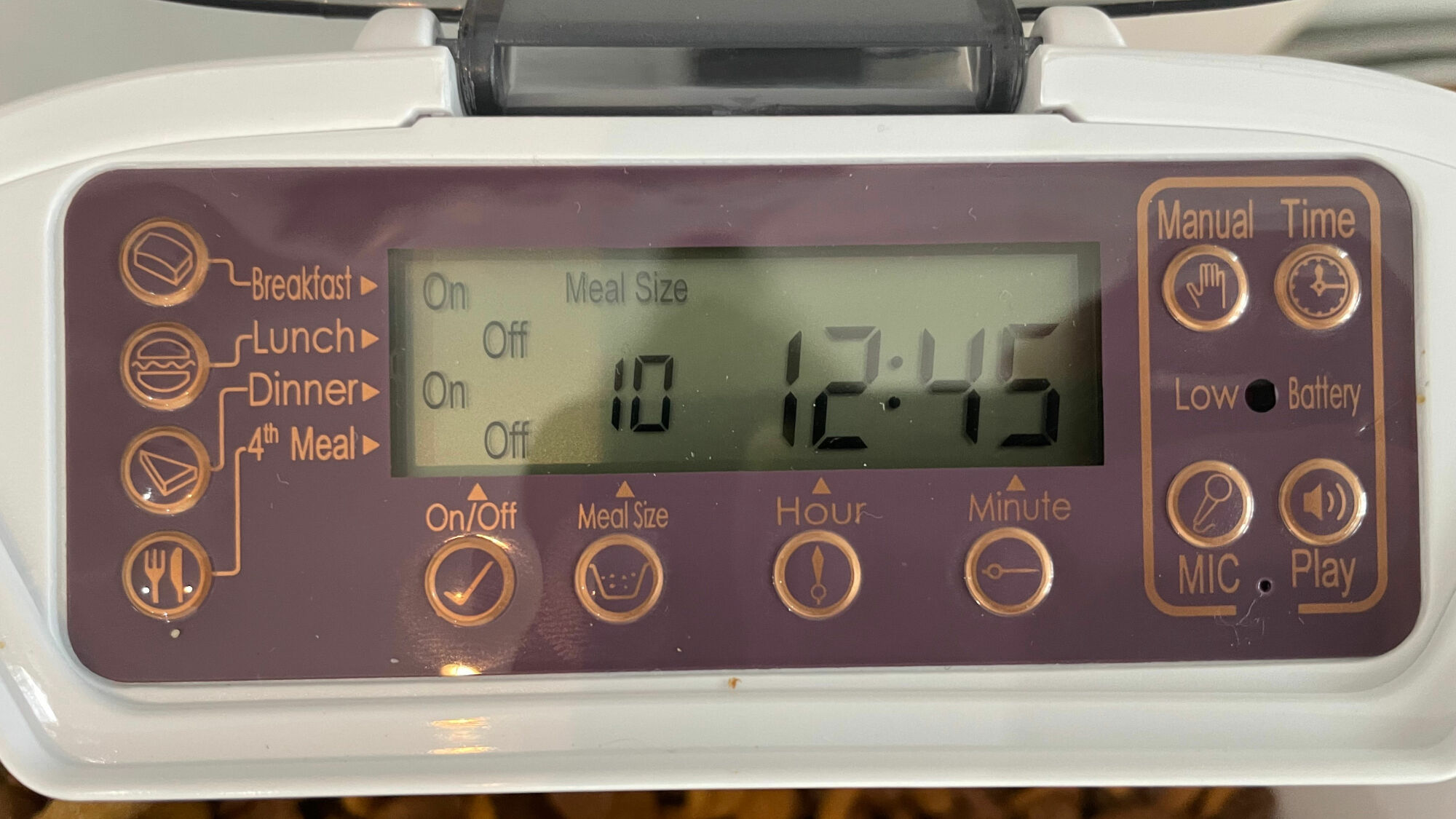 What’s the deal with the portions?

Finally, the clock was set, as were meal times for Lola’s breakfast and dinner. Now, to figure out the portions. According to the manual, one portion equals 10 grams of food (5 grams from the smaller dispenser). For the average pet owner who is used to measuring meals relative to a cup, this a tiny amount of food.

Because of this, I had to do some trial and error to figure out how many portions of food to set. Through some Google-aided calculations, I figured out that one cup of food equals 12.8 portions. Since this conversion depends on weight and kibble size, I used the very unscientific method of dispensing that many portions and putting it into a cup for eyeball comparison. Ultimately, I settled on 10 portions. 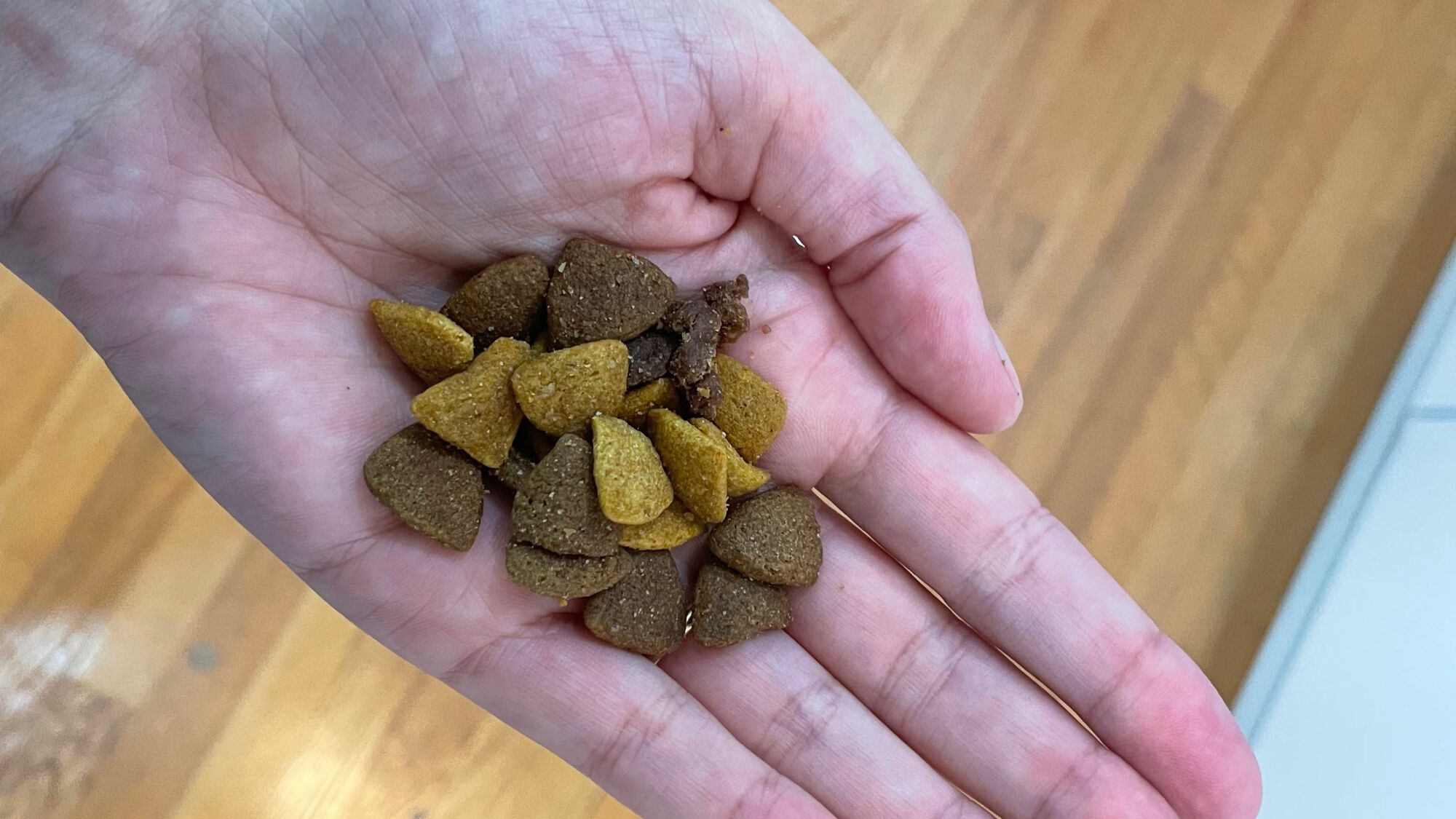 The amount of portions you can dispense inexplicably goes all the way up to 39. Why you would want 39 different adjustments that really only amount to a few kibble bits of difference, I will never know. Also why the number 39? I’ll leave that question for another time. I will say, this amount of customization and precision would be very beneficial for using portion control with overweight pets, or dispensing a little bit of food as a treat.

The voice feature is useful (and a little creepy)

The last step was to record a voice message that plays as the food is dispensed. Again, the way it programs the voice recording isn’t very intuitive. You have to press and hold “Mic,” and there’s no indication that it is actively recording. You can test the message after recording by holding down “Play,” but it just seems overly complicated.

After getting over the unsettling notion that a machine was using my voice to call my dog, I have come to appreciate how useful it is. Most of the time, the sound of the food hitting the bowl is enough for Lola to come running over. But sometimes she’s loafing on the coach or doesn’t hear it. So when the familiar voice message calls her, she immediately perks up and knows what to do. 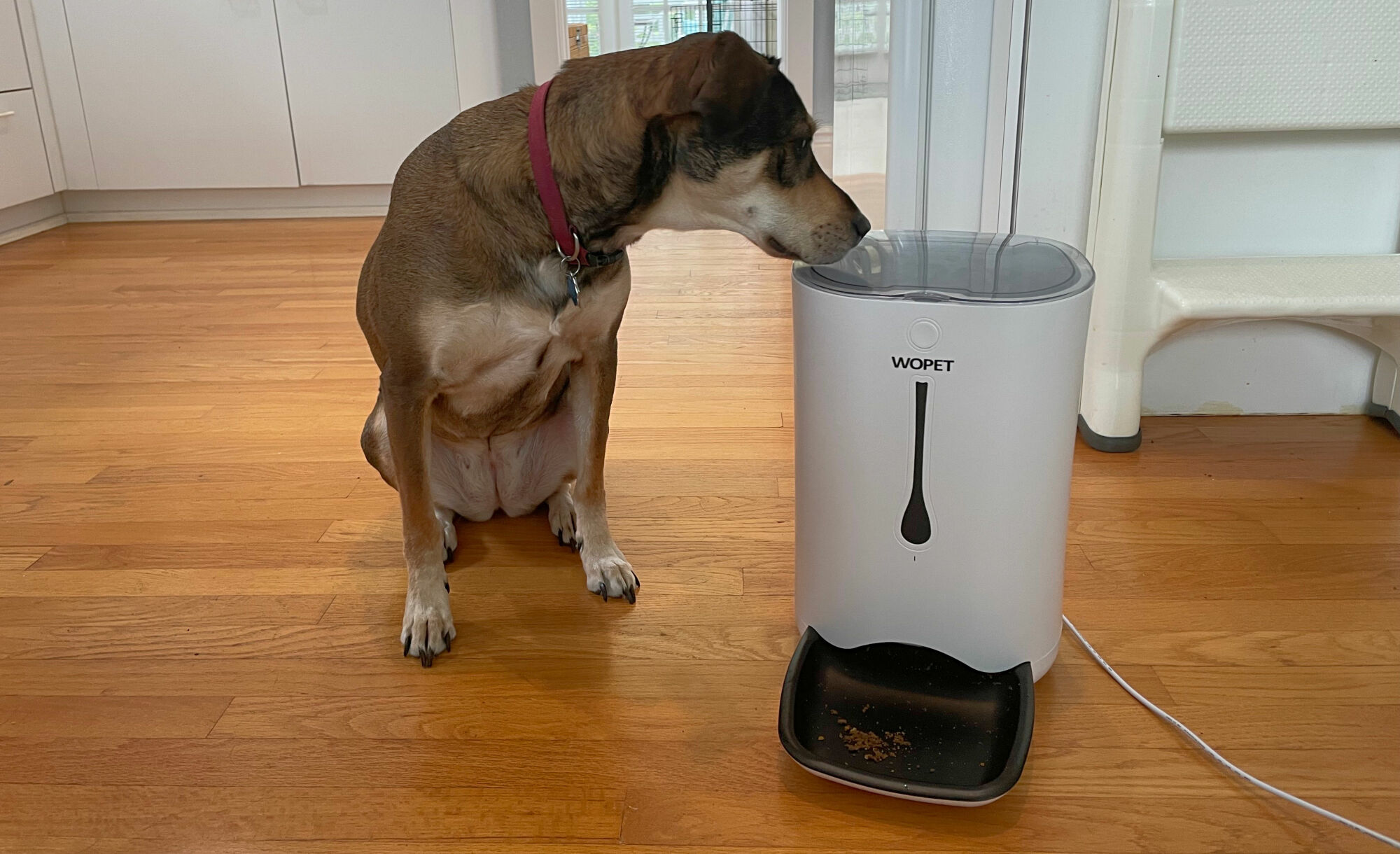 Lola inspecting after hearing my voice message from the feeder.
Credit: Mashable

This feeder may not be for everyone. At $75, it’s not cheap, despite being one of the more budget-friendly options. Plus, if you’re going to spend the money on an automatic pet feeder, I could understand wanting to shell out a little more for camera access, an app, and a better interface. The major drawback is the panel interface and slightly confusing programming. I could get past that once it was up and running, but it might be a dealbreaker for some, especially those with limited hand mobility.

Ultimately, this feeder doesn’t need any more features. The existing ones just need to be improved.

Why you should pay attention to HONOR in 2022

Tesla watchers worry that Elon Musk is too distracted

The Last Clockwinder review: A Quest puzzler that’ll challenge your mind and body